DESCRIPTION
Ezekiel Bale is a human male whose youth is apparent in his boyish face. He is built like a young man used to manual labor. His shaggy hair is sun-bleached and unkempt, and his skin tone suggests that he has spent the majority of his time working outside.

He wears a beautiful suit of mithral half-plate armor, taken as spoils from the goblins inhabiting Lord Stormweather’s mine. It looks unnatural on him, but he moves in it like he was born to do so. He wields a well-crafted greatsword, purchased in Daggerford before the party made their way to Waterdeep. The rest of his gear is piecemeal, and his clothing is plain and functional.

When he speaks he uses short, simple words, and though he tries to listen when others are talking to him, he gets confused easily if their phrasing or vocabulary gets too complex. Despite his size, he seemed as meek as milk before the storm hit and the slavers stopped paying as close attention. For those who paid him any mind during that experience, it seemed to have scared the hells out of him.

BACKGROUND
Zeke grew up on a farm, where he spent most of his time working alongside his family in the fields outside of Mosstone in central Tethyr. He wasn’t blessed with an overabundance of smarts, but the gods saw fit to balance that by making him hale and strong. He could take direction and was of an even temperament, making him an ideal field hand, even from an early age.

His siblings might tease him for being slow, but woe unto anyone outside of the family who tried to do the same. His familial bond was well developed, and since he was bigger than many other children of his age, he was ready and able to take on anyone who thought to bully his smaller siblings.

Zeke was taken by the slavers while relaxing on the beach alone during some free time. He wore himself out playing in the surf and decided to take a nap beneath a tree. He woke up only to be drubbed into unconsciousness once more, and the next thing he knew, he was chained in the slaver ship.

PERSONALITY
Zeke is a farm boy in over his head and scared to death of never seeing his family again. The last several days have been like a living nightmare for the Tethyrian lad. It was his petrified stare that probably prevented Hafkris from putting the stocky boy to work rowing with the other slaves he pulled out from the galley.

In normal situation, he is sweet-natured and protective of those weaker than him. Fortunately, he can also handle almost any weapon like he was born to wield it. Because he is so guileless, he is easily manipulated. He is not a planner. He simply acts, because thinking is a foreign concept.

He is motivated by anything offering a hope of rescue from the island, and he will do everything in his power to help the other captives escape, as well. 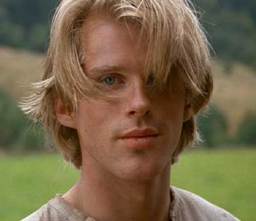